Peter has created his own original 60-minute comedy called “ A Night with Beau Tyler” starring the fictional self-help guru. In the live version, audiences are invited to attend a real-time Beau Tyler Motivational Workshop.

Although the show satirises the self-help industry, Peter  Feeney hopes audiences leave motivated. He wants them to look beyond the laughs and question the role of self-help swamis in buttressing the “toxic values” of modern-day capitalism. He says we need to consider whether quick-fix solutions and “think yourself happy, well and/or wealthy” mantras benefit society.

Peter has been a professional actor for nearly 20 years.  Prior to that he was a graduate student in Politics.  He began his career in Stand-up comedy and has kept the faith ever since, performing to great acclaim in the Auckland and Wellington Comedy Festivals in 2005 and 2009. He has worked extensively in television, film and theatre, including at Fortune, Court and Circa theatres in New Zealand, and The Queensland Theatre Company in Australia.

Peter’s TV credits include Cold Feet and Dark Knight (UK); You Wish, Hercules, Xena (US); All Saints, Stingers, A Difficult Woman (Australia); Shortland Street, Secret Agent Men (NZ).  Credits for film include the feature Toy Love and the internationally acclaimed short The Platform, for which he was a nominee for Best Actor at the 2003 NZ Film Awards.  He played a lead role in Jonathan King’s debut feature film Black Sheep, and appeared in David Slade’s US Feature 30 Days of Night alongsideJosh Hartnett and Danny Houston.  He also starred in the Disney tele-feature Johnny Kapahala.

In his work as a Corporate entertainer Peter brings his political antennae and comedic writing – as well as his proven abilities as a character actor.   Peter turns up with a fully realised and comedic characters. He can work too as an impersonator, creating a character specifically for your event (see examples below). His most famous creation is Beau Tyler, a Tony Robbins style motivational speaker, who has appeared in television commercials and has his own stage show. Most recently Peter has branched back into political satire and comedy as himself – not such a big jump as he has a 1st Class Honours degree in Politics from the University of Melbourne and has been an occasional writer for Metro and North and South magazines on social and political issues.

Peter’s fast wit, ability to improvise, solid research and organisational abilities also see him in demand as an MC. And he’s happy to collaborate with other entertainers – he knows most of them personally! 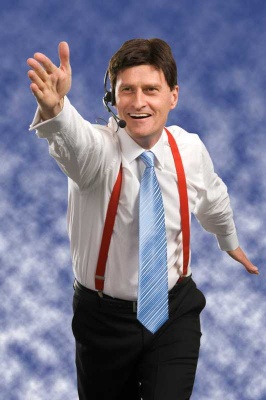 "Who needs Anthony Robbins, when New Zealand has our own Beau Tyler? What a night, not a dry eye in the house. Beau had the whole room in fits of laughter from start to finish. An amazingly consummate performer with the ability to engage with the entire audience"
NZ Hansen User Group
Facebook-square Instagram Youtube Vimeo