Award winning Cath Jamison delivers spectacular, professional and edgy performances, securing her as an acclaimed and prolific talent within the Australian Entertainment Industry.

Noted as one of Australia’s most bizarre and unusual women and only female mentalist, Cath utilises her trademark sass, style and mind manipulation to captivate audiences until the very end. Cath brings a sense of fun to her shows and has been described as Ellen DeGeneres meets Derren Brown. This wickedly hilarious entertainer offers a feminine approach to the world of intrigue, and is recognised worldwide for her astonishing skills in the fields of magic and mindreading.

Cath’s impressive reputation has led her to be the only Female Magician to represent Australia in the internationally acclaimed show ‘Celebration of 100 Years of Magic in Australia’ with famous acts from around the globe and was the Guest Star to tour with the leading Las Vegas Magician Chuck Jones on his “World Festival of Magic” show.

Her versatility has led her into other areas of the entertainment industry where she was the guest act for international star Sophie B Hawkins. Cath has also performed alongside some of our nation’s finest names in showbiz such as Rove McManus, Anthony Warlow and Tony Lamond.

As well as on the theatre stage, Cath Jamison has brought her magic to the screen with recent TV appearances on the Melbourne International Comedy Festival Gala, featured on 9am with David and Kim, the News Weather Report with Mike Larkin Channel 10, A Current Affair Channel 9, Australia’s Got Talent and was a regular guest magician on the Denise Drysdale show Denise Channel 7.

Cath was seen by packed houses at the Melbourne International Comedy and Fringe Festivals with her own highly successful sell out show Secret Life of a Woman and went on to star with Katie Underwood in the hilarious production of Dolls, Doves and a Diva.

Cath Jamieson is undoubtedly the best and funniest female magician in Australia. From elegant close up magic and dangerous liaisons, to making your CEO materialise on stage, Cath will make your next event an unforgettable success. 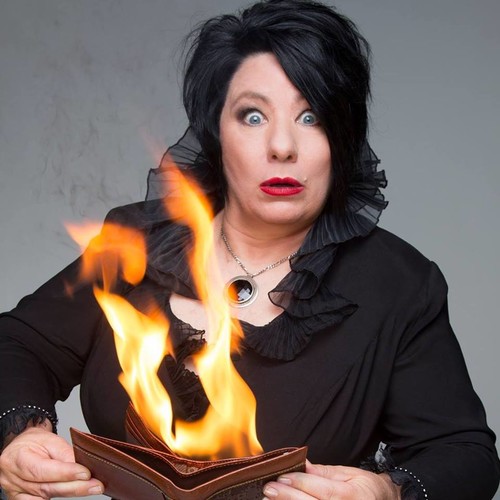 Play Video
"As Australia's number one female magician, she has carved herself a solid (and saucy) niche in the industry."
The Age
"Crazy woman who eats razor blades! How did she do that?... This is one show not to be missed!"
Tim Burton, Director of Batman, Bigfish and Charlie and the Chocolate Factory.
"Cath was a hit with everyone... Excellent!"
Joanne Tomlinson, Barclays Global Investments
"She blew our guests away with her breathtaking performance."
Boris Von Rechenberg, Guinness Book of Records 50th Birthday
"A fantastic response from the audience!"
Brett Haylock, The Famous Spiegeltent
"Clever and captivating performance"
Darryl Somers
"A world class act that flirts with danger"
Steve Vizard
"Crosses the line of danger... seducer of the blade."
Denise Drysdale
Facebook-square Instagram Youtube Vimeo